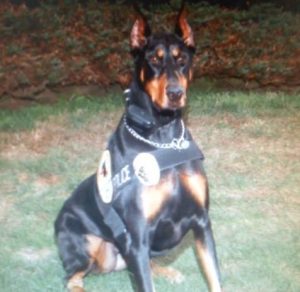 The Pittston Township Police Department K-9 Unit was established in 2013. The K-9 team currently consists of one officer partnered up with their own K-9. Our K-9 handler is Officer Edward Sulima along with his partner Athena, which is a Doberman Pinscher. Officer Edward Sulima and Athena attended training from Alan Finn Designing Dogs out of Old Forge, Pennsylvania.

The Pittston Township Police Department’s K-9 Unit responds to assist officers in the field when necessary. The K-9 Unit is also deployed upon calls for assistance with other local, state and federal agencies. The K-9 Team is used for a wide array of tasks, which include drug detection, locating fleeing suspects, missing persons, searching homes and buildings and search and rescue.